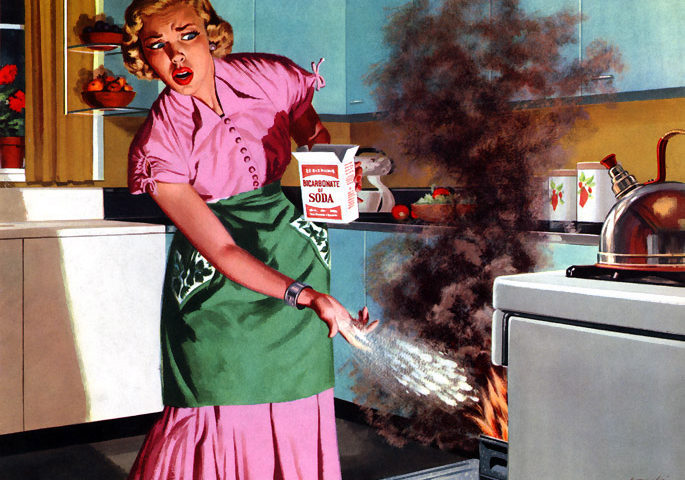 We all know that we should have smoke detectors somewhere in our houses and offices and anyplace where we are staying. And to be on the safe side you should check them regularly to be sure that they are still in working condition. Most smoke detectors have a button on them that you push and the shrill alarm goes “beep”, just to make sure they are working properly. 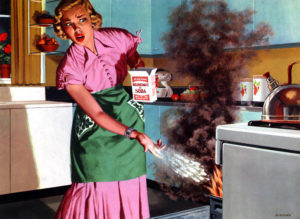 My mom uses a much simpler way to check them. She cooks!

Now, she’s not a bad cook, in fact she has always amazed me with “a dash of this” and a “pinch of that” and Voila! Culinary perfection!  But sometimes just the heat from the oven or broiler or something else will set off the alarm. She has the distinction of having it go off in their 5th wheel trailer while attending a Jazz Festival in Sacramento, California years ago. Her cousin, came running over from the next site….not with a fire extinguisher but with a plaque in her hands that said “There’s No Fire. My wife is just cooking again!” said “my husband gave this to me years ago but I HEAR you need it more than I do right at this minute”. You can always count on your relatives to give you moral support.

Mom has now added Alaska to her long list of “test sites”. One of the Bed &Breakfasts that they were staying in was a kitchenette apartment. After a busy day of sightseeing, they decided to buy a pizza from Safeway and bake it at the B&B. Mom tells the story this way:

“The stove in the unit was gas and rather old fashioned. I looked at the oven but couldn’t see any gas jets but I went ahead and turned the knob, which had NO information on it as far as temperature marks, etc., and heard the gas come on and the oven started to get hot. Finally I opened the “drawer” at the bottom and found that it was the broiler and the gas jets were in this compartment….it did dual duty…broiler and oven. As I said previously, there were no marks on the knob so I had no idea how hot to set the oven but turned it almost all the way assuming that 450 degrees would be far to the right. Next I looked at the width of the oven and the size of the pizza and realized that it was not going to fit in the oven so I had to cut off one side of the pizza. There also was no pizza pan so I carried it over to the oven and with the help of my husband, we slipped the pizza onto the oven rack. It started to bake and when I opened the oven door to check on it, the smoke alarm went off…not only did it start the high pitched tone, it also started saying FIRE….FIRE! I had never heard one talk to me before! So we opened the door and windows but it continued to go off even after our grandson took it down from the ceiling. So we took out the batteries and continued to bake the pizza until it was browned. It turned out just perfect. When we put the battery back in after we finished eating and it started saying “CARBON MONOXIDE!” So we opened all the doors and windows again just in case but figured that it was just going through its series of commands after having the battery replaced. But we left one window slightly ajar when we went to sleep that night just in case. And guess what?? We all woke up in the morning. When we spoke to the maintenance man about the incident, he told us that the oven only HAS one temperature….High. Life with Jeanie is never dull!”

If YOU cook like Jeanie, (your taste buds should be very happy if you do…) then you have probably experienced something like this yourself. But no matter how you test the batteries in your smoke detector, just make sure you DO test them. A smoke detector can’t prevent a fire but it certainly can provide a tremendous amount of protection against serious damage or injury. And don’t forget to contact the knowledeable agents at The Writer Agency, LLC to obtain the rest of the protection you need. Call or Click today! 308-436-4202 or www.insurance-by-katie.com

What “yummy” concoction have you cooked lately?  Share your recipies (and fun cooking stories too)!